Although numerous studies have investigated the effects of load carriage on gait mechanics, most have been conducted on active military men. It remains unknown if men and women adapt differently to carrying load. The purpose of this study was to compare the effects of load carriage on gait mechanics, muscle activation patterns, and metabolic cost between men and women walking at a constant speed. We measured whole body motion, ground reaction forces, muscle activity, and metabolic cost while 17 men and 12 women walked on an instrumented treadmill. Subjects completed four walking trials, each five minutes in duration, while carrying no load, or an additional 10%, 20%, or 30% of body weight. Women were shorter (p<0.01), had lower body mass (p=0.01), and had a lower fat-free mass (p=0.02) compared to the men. No significant sex differences were observed for any measured gait variable or muscle activation pattern. For both men and women, as load increased, so did net metabolic cost, the duration of stance phase, peak stance phase joint hip, knee, and ankle flexion angles, and all peak joint extension moments. The relative increase in peak vertical ground reaction force was less than the carried load (e.g. mean 5-6% increase in peak ground reaction force with each 10% increase in load). Integrated muscle activity of soleus, medial gastrocnemius, lateral hamstrings, vastus medialis, vastus lateralis, and rectus femoris increased with load. We conclude that, despite differences in anthropometry, men and women undergo similar gait adaptations when carrying a load.

Ensemble averaged data of men and women walking with up to 30% of body weight; available for download and use by others.

This study describes gait mechanics, muscle activity and metabolic cost in men and women walking at a constant speed and carrying upt do 30% of body weight. 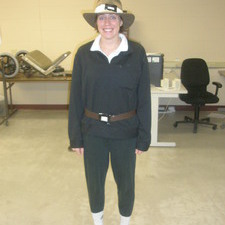 Mean and standard deviation joint angles and moments, ground reaction forces, and muscle activities of seven lower extremity muscles, separated by sex. Spatio-temporal measurements, anthropometric characteristics, and metabolic cost, separated by sex.
These data can be used to replicate figures in the manuscript and provides researchers with the exact values of of the outcome variables (i.e. not extrapolated from the figures).

OpenSim simulations of loaded walking
with an assistive...