• Webinar on Simulations of Running | http://bit.ly/oDIUOa

Muscle contributions to fore-aft and vertical body mass center accelerations over a range of running speeds from Samuel Hamner on Vimeo.

The goal of this study was to determine how muscles and arm swing affect dynamics of the body at different running speeds. Specifically, we determined how muscles contribute to mass center accelerations during the stance phase of running, and how the arms act to counterbalance the motion of the legs. We achieved this goal by creating and analyzing muscle-driven, forward dynamic simulations of ten subjects running across a range of speeds: 2 m/s, 3 m/s, 4 m/s, and 5 m/s. An induced acceleration analysis determined the contribution of each muscle to mass center accelerations. Our simulations also included arm motion, allowing us to investigate the contributions of arm swing to running dynamics. These simulations use experimental data as inputs, so we also collected data to characterize joint angles, joint moments, and ground reaction forces at different running speeds.
2,855 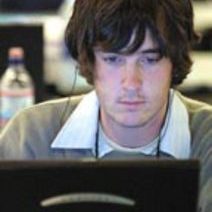 This project serves as a repository of experimental data (i.e., motion capture, EMG, GRFs), subject-specific models, and resulting muscle-driven simulation results for 10 male subjects running at multiple speeds: 2 m/s, 3 m/s, 4 m/s, and 5 m/s. Data was collected on an instrumented treadmill in the Human Performance Lab at Stanford University. All subjects were experienced runners, each reporting to run at least 30 miles per week.