Humans run faster by increasing a combination of stride length and stride frequency. In slow and medium-paced running, stride length is increased by exerting larger support forces during ground contact, whereas in fast running and sprinting, stride frequency is increased by swinging the legs more rapidly through the air. Many studies have investigated the mechanics of human running, yet little is known about how the individual leg muscles accelerate the joints and center-of-mass during this task. The aim of this study was to describe and explain the synergistic actions of the individual leg muscles over a wide range of running speeds, from slow running to maximal sprinting. Experimental gait data from nine subjects were combined with a detailed computer model of the musculoskeletal system to determine the forces developed by the leg muscles at different running speeds. For speeds up to 7 m/s, the ankle plantarflexors, soleus and gastrocnemius, contributed most significantly to vertical support forces and hence increases in stride length. At speeds greater than 7 m/s, these muscles shortened at relatively high velocities and had less time to generate the forces needed for support. Thus, above 7 m/s the strategy used to increase running speed shifted to the goal of increasing stride frequency. The hip muscles, primarily iliopsoas, gluteus maximus and hamstrings, achieved this goal by accelerating the hip and knee joints more vigorously during swing. These findings provide insight into the strategies used by the leg muscles to maximise running performance and have implications for the design of athletic training programs.

This project is a repository of overground running data (3.5m/s 5.2m/s, 7.0m/s and 9.0m/s) along with a working musculoskeletal model to perform simulations and derive the function of individual muscles. 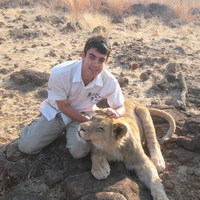