To provide a more accurate model of the intervertebral disc as a 6x6 stiffness matrix, allowing for the study of coupled motion. We also address some of the complications present in using the existing bushing function to model the disc.

This project features a "SpineBushing" element that can be used to model the intervertebral disc as a 6x6 stiffness matrix. This permits the study of the disc's force-motion relationship for the case where the coordinates are coupled to each other.

The guiding equation is,

The SpineBushing features two *key* differences from the existing bushing element:
(1) we incorporated a full 6x6 stiffness matrix instead of the current three translational and three rotational stiffnesses.

Further details are provided in the accompanying documents. 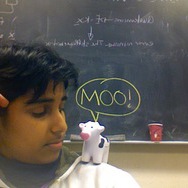 (1) C++ code used to build the plugin. The code is commented extensively. You will need to build the solution file in CMake, then build & install in c++ into whatever OpenSim version you're using.

Musculoskeletal Model of the Lumbar Spine