Multiscale Modeling of the Mammalian Circadian Clock: The Role of GABA Signaling
1260
AboutDownloadsDocumentsForumsIssuesNews

The goal of this project is to develop a multiscale model of the mammalian circadian clock and to integrate this model with targeted experiments and novel computational tools to gain improved understanding of clock connectivity, synchronization and entrainment properties.

The synchronization and entrainment of coupled biological oscillators is an emerging research area in complex network systems. The mammalian circadian clock located in the suprachiasmatic nucleus (SCN) of the hypothalamus consists of approximately 20,000 pacemaker neurons that are coupled together to produce a robust overall rhythm that drives other bodily functions such as sleep patterns. The SCN represents an ideal model system for studying biological network design and behavior due to accumulating data on individual SCN neurons and their interactions. Experimental studies have shown that SCN intercellular communication is primarily mediated by two neurotransmitters: vasoactive intestinal peptide (VIP) and gamma-aminobutyric acid (GABA). While VIP is well established as an essential synchronizing agent, the role of GABA with respect to its inhibitory/excitatory, day/night, synchronizing and entrainment effects remains controversial. Improved understanding of neurotransmitter mediated intercellular signaling in the SCN will have important clinical implications for prevention and treatment of circadian rhythm disruptions, including mood and sleep disorders and metabolic diseases.

The goal of this project is to develop a multiscale model of the SCN and to integrate this model with targeted experiments and novel computational tools to gain improved understanding of SCN connectivity, synchronization and entrainment properties. The research focuses on GABA signaling because its role in the SCN is prominent, not well understood, and recent advances by the three participating investigators will enable a complete and careful dissection of the role of this common neurotransmitter with synapse-level resolution across large arrays of circadian neurons. The multiscale model will establish a link between core clock genes and ion channels at the individual cell level and network synchronization and entrainment behavior at the SCN tissue level through cell-to-cell connectivity. Targeted experiments will be performed to inform the construction and validate the predictions of the network model. General computational techniques for model reduction and efficient simulation of heterogeneous cellular networks will be developed to facilitate analysis of model behavior over a wide range of environmental conditions. The research has the potential to be highly transformative by both advancing the multiscale modeling of coupled oscillators/complex networks and by fundamentally changing our understanding of GABA signaling in circadian timekeeping and potentially in other brain regions. 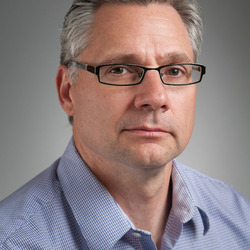 Improved understanding of neurotransmitter mediated communication in the mammalian circadian clock will have important clinical implications for prevention and treatment of circadian rhythm disruptions, including mood and sleep disorders and metabolic diseases.

Vector Space
Construction for
the Microbiome

VTK Binaries for
the SimTK Core

Load applied to ACL by non-planar
motion of knee...